From Hwy 1 and Squilax-Anglemont Road to Holding Road to Adams Lake, Adams West FSR and Agate Bay Road to Hwy 5. Total distance is about 70 km, about 27 of which is gravel. A pleasant ride with some nice views of Adams Lake. Includes a short side trip to Adams Lake Provincial Park. Should be ok for the majority of street bikes if dry. 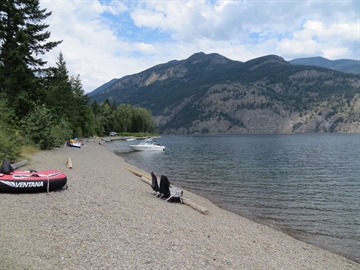 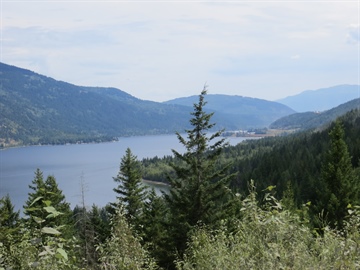 0 km - turn off Hwy 1 onto Squilax - Anglemont Road which crosses above the narrows between Shuswap and Little Shuswap Lakes.
3.7 km - turn off on Holding Road to Adams Lake
10 km - road forks - go left and up Adams West FSR (right fork goes to sawmill); the road turns to seal coat / gravel. The surface is fairly smooth, but there is some loose gravel in some sections and along the shoulders, so use caution in the corners. Watch for logging trucks! The road gradually climbs high above the lake before descending later on. There are some nice views.
18 km - turn off to Adams Lake Provincial Park (1.6 km gravel road to lake) - should be okay for the majority of street bikes, but use caution.
37 km - (includes side trip to park) - 4 way stop and the beginning of Agate Bay Road (west). Instead of turning left onto Agate Bay Road, you could continue straight ahead and follow the FSR up the west side of Adams Lake (I have not ridden this section).

The road runs through a narrow valley with farms. The road is meandering. It rises and falls; there are some nice corners, but it's not super twisty (some straighter sections). Further along, the road becomes a bit twistier and also passes a small, pretty lake (53 km). The road eventually descends out of the hills and connects with Hwy 5.

I rode my DR650, but my V-Strom would have been a better choice.