A nice meandering and twisty backroad starting in Grand Forks BC and heading north along the Grandby River. 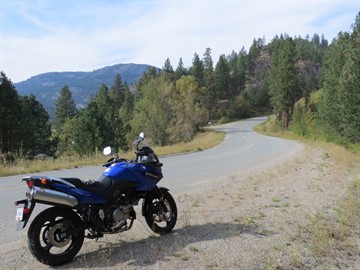 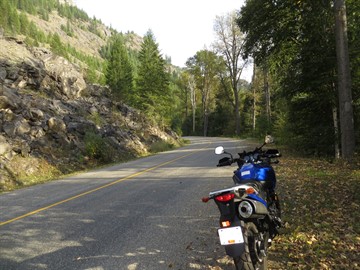 This road is well worth the detour on your motorcycle. It's about 45 km to the end of the pavement where you'll find a nice place to sit and eat your lunch on a rock outcrop next to the Grandby River. There's also a camping spot there. For the most part, the road surface is in pretty good condition. There are a lot of corners along the route. There are some straight sections, but they're not that frequent or long. The scenery is interesting too. A real nice ride. I thoroughly enjoyed it. The section of North Fork Road that is north of Grandby Road is a much more enjoyable ride than the south section of North Fork Road (on west side of Grandby River).

There are forest service roads, starting with Grandby FSR, that continue north past the end of the pavement. I believe that you can (could?) ride all the way to Edgewood and then to Hwy 6, but I have only ridden to about 30 km south of Edgewood (travel distance about 45 km along FSRs) on my DR650. There was a large wild fire south of Edgewood in 2021, so it may be some time before this area can be ridden through again along the FSRs.