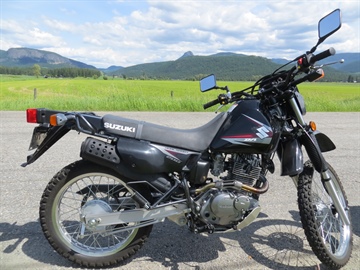 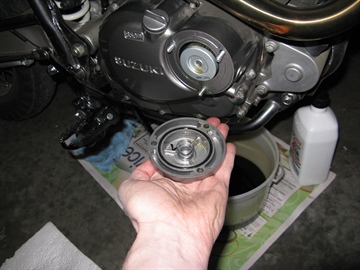 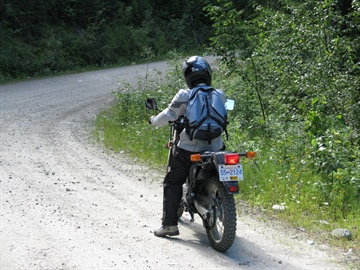 The top speed is only about 115 km/hr, basic suspension, low power, cramped for larger riders

The DR200SE is a small, simple, easy to ride dual sport motorcycle. It's fairly light weight and has a low seat height and electric start. It's a good choice for a newer or smaller rider. You can ride it on the highway, but I would avoid the freeways as the motor does not make a lot of power, and subsequently, the top speed is only about 115 km/hr. The DR200 is more at home in town, on the backroads, dirt roads and easier trails. The bike is capable on rougher trails; you just have to ride at a more moderate pace than you might on a dirt bike or more off-road focused dual sport. The bike has a very low first gear which is good for crawling over the rough stuff.

The suspension is basic, but it is adequate for both on-road and less aggressive trail use. When stopped, and you compress the suspension by rocking the bike, it feels soft. When riding the bike on rocky trails with the tires aired-up to street pressures, the suspension feels harsh. I've never bottomed the suspension, but I don't ride the bike fast through big dips or ditches, and I don't do jumps on it either. For reference, I weigh about 68 kg (150 lbs) without riding gear.

The DR200 has a single front disk brake and a rear drum brake. I've found the brakes to be perfectly adequate on pavement and on dirt.

The stock tires are well suited for the likely intended purposes of this bike. Of the tougher trails that I've ridden this bike on, it was the stock tires that were the limiting factor: the stock tires offer limited traction in the slippery stuff - mud and loose surfaces on hills. We replaced the stock tires in 2021 due to age more than anything (they were probably only half-worn at 6900 km). The bike has seen more dirt use in 2020 and 2021, so we chose more dirt capable tires as replacements: Pirelli MT21 80/90-21 and 110/80-18. These tires are 1 cm wider than the stock tires and are rated as 90% dirt / 10% street. I had Pirelli MT21s on my DR350S years ago, and I was happy with them. On the DR200, the MT21s greatly improve the traction in the dirt, loose rocks and especially in the mud. There is a small price to pay, though, as they do not feel as good on the pavement, but that was expected. They'll likely wear faster too. If you're going to be doing a lot of trail riding, I recommend these tires; they greatly improve the experience, and they're safer in slippery off-road conditions. If you're going to be riding mostly pavement and gravel roads, then a 50-50 tire (like a Shinko 244) may be a better choice.

One thing I would like to point out about the DR200 is the large fuel capacity - 13 litres. That combined with a low fuel consumption (varies, but we've gotten as much as 40 km/l), gives this bike a pretty good fuel range, probably way better than any other new small dual sport with a stock fuel tank. A 2021 Yamaha TW200 has only a 7-litre fuel tank. A 2021 Kawasaki KLX230 has a fuel capacity of 7.5 l.

The DR200SE was updated a few years ago with more modern styling and improved ergonomics. I believe that the chassis and motor were essentially unchanged. The bike was discontinued after 2020, but there's always the used market.

This is a low maintenance motorcycle, and maintenance is relatively simple although access to the foam air filter is a bit of a pain (you have to remove the side covers and seat, and the air box opening is small). The valve clearances were in-spec at the break-in service, but I did have to adjust the intake valve clearance at around 5000 km (it was a bit loose), but the exhaust was still in-spec. The valves have screw type adjusters. The original battery lasted for 5 years (removed from bike while in storage and charged monthly). The same model of battery used in another bike lasted 8 years under similar conditions. As mentioned previously, I replaced the original tires with Pirelli MT21s. The only other maintenance performed on this bike has just been the usual items applicable to most other motorcycles: check bolts, wheels, spokes, tires and brakes, replace brake fluid, oil and filter changes, air filter maintenance and replacement, chain maintenance, winterizing, etc.

The bike has been reliable. I did have to resolder an electrical connection in the tail light fairly early on. Also, in the past year the fuel petcock, while in the on position, had been slowly leaking gas to the carb while the bike had been sitting (not running). The petcock is vacuum operated. There are three positions on it: on, reserve and prime; there is no off position. Normally gas should only flow to the carb when the engine is running or while the petcock is in the prime position. I imagine that either an O-ring or diaphragm in the petcock has deteriorated and needs replacing. Suzuki doesn't offer a repair kit or individual replacement parts except for the entire petcock assembly (expensive). There is an after-market repair kit available ($31) as well as after-market petcocks. If it just needs an O-ring replacement, I may be able to buy one from an auto supply store. I've been checking for fuel in the carb over this (2022-2023) winter, and it appears that the petcock has stopped leaking even though I haven't gotten around to fixing it.

The OEM DR650SE turn signals have a shorter rubber stalk than the DR200SE ones, otherwise they look pretty much the same. The mounting "bolt" on the BikeMaster signals is about 1 cm longer than the OEM ones and makes contact with the instrument cluster and probably the rear fender (if mounting on the rear) on the DR200SE. I had to carefully cut off some of the "bolt" with a Dremel-like tool to make them fit. The BikeMaster turn signals are not made as well as the OEM signals, but they are a lot cheaper ($31 CAD vs $139 front and $110 rear, each). The lens on one of the new turn signals didn't fit properly (I tried to fix it, but I was only able to improve it some), so I used silicone sealant to seal it on two sides (it's not noticeable). On that same turn signal, the alignment collar was completely inset into the stalk of the turn signal. On the other turn signal, the collar was oriented such that the signal was pointing about 45 degrees downwards from horizontal if inserted into the mounting bracket; looking at a parts fiche for the DR650SE, it looks like the cut-out on the mounting bracket is also angled from horizontal, so I guess I should have confirmed that prior to ordering the BikeMaster signals, but then again, I wasn't able to find any OEM-like replacement turn signals available for the DR200SE. The packaging of the BikeMaster signals states Suzuki Front/Rear. The BikeMaster turn signals use the same type of connector as the Suzuki ones. Another thing to note on the BikeMaster turn signals is that the wire is about a metre long, whereas the OEM one is about 32 cm long.

Comparing the DR200SE to other bikes

For 2023 both the KLX230 and the KLX230 S get a new headlight and headlight cowling. The Canadian Kawasaki website lists green as the only colour with a price of $5749 CAD (Non-ABS) + fees + taxes for both versions. ABS is not listed as an option for either bike as of Jan 18, 2023.

The DR200SE is a good, reliable, inexpensive, small, simple dual sport bike best suited for smaller or newer riders, but experienced riders can still have fun riding it as I can personally attest to. It's a little low on power, but it gets the job done and can go a great distance on a single tank of fuel. It can even handle fairly rough trails if ridden at an easier pace. Not the best choice for highway riding due to its lower power.