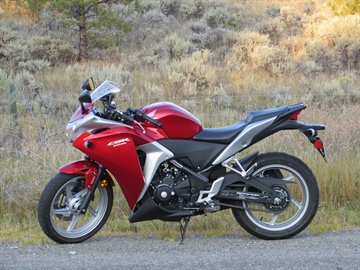 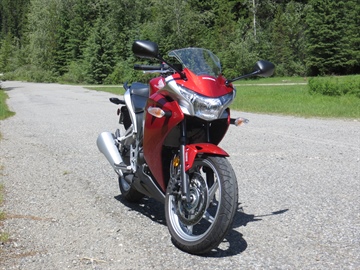 Poor paint quality on mounting brackets. Buzzing in fairing panels. Minor assembly issues. Front fender. A bit low on power on hills and for passing on the highway.

The CBR250RA is a fun little bike to ride on the back roads. It’s quite an entertaining little motorcycle even if you’ve been riding for years. Suspension components are budget items, but they work well on this bike. The suspension is moderately firm but not harsh. Handling is stable at speed and in the corners. If you do hit a bump or dip in a corner at speed there can be a bit of a wobble, but the bike corrects quickly; it's never been disconcerting, and I don't think it's any worse than the CB500F I test rode. For reference I'm about 68 kg in street clothes.

The motor feels strong (for a 250) when riding in town. It seems to have a stronger bottom end than the Ninja 250. At highway speeds there is adequate power, and the bike will cruise on the highway at 120 km/h, but it’s more relaxed at 100 – 110 km/h. It’s not a problem to maintain a modest cruising speed on hills on the highway, but a long steep hill will likely require a down shift. Passing other vehicles on the highway has to be planned and requires a long stretch of empty road. At an indicated 100 km/h, the tach is showing about 6000 rpm when in top gear. The engine is fairly smooth in top gear below 110 km/h, but mild vibrations can be felt in the grips, seat and foot pegs though it's not bothersome. At higher speeds (RPMs), though, it starts to get a little “buzzy”. Gear changes are fine.

There is some buzzing from the fairing panels from at least two locations somewhere. It's not really an issue when riding on the highway while wearing ear plugs, but it is very annoying if riding in town without ear plugs.

The CBR250R has been compared to the Honda NT650 (Hawk GT) which was first available in 1988. We’ve owned two Hawks over the years. The Hawk is only about 40 pounds heavier than the CBR250RA but makes about twice the power. The Hawk is a blast to ride on the twisty back roads, it makes good power down low, and it sounds cool when rolling on the throttle.

We were a little disappointed in the assembly and build quality of the little Honda when we got it; it’s just not what we would expect from Honda. It’s definitely not up to their usual standards of fit and finish and quality control for the bikes made in Japan. The CBR250RA was made in Thailand, I believe. The paint on the fuel tank and fairing panels looks fine, but the paint on mounting brackets is not great; after washing the bike once there was minor rust at some of the lower fairing mounting points. The paint on the engine cases seems pretty thin too. After reinstalling the fairing panels after performing maintenance on the bike you notice that the fit of the panels is less than perfect – some mounting holes don’t exactly line up – you have to “persuade” them a bit. If you examine some of the components on the bike you can tell that they are budget items. The frame welds are messy too; some of them look like a high school student welded it in metal shop. You get what you pay for, I guess, but everything works fine. There were a number of assembly issues with the bike – things that should have been picked up during the PDI, but weren’t. Things like hoses not being connected, an incorrectly mounted turn signal, the swing arm pivot cap fell off, the chain was too loose, and a fairing panel was incorrectly installed. One of the metal frame loops that the rider seat hooks under is misaligned which makes it a little difficult to remove and reinstall the seat.

The front fender is pretty useless. It does not extend back and down far enough to be effective. You end up with muck in your radiator, on the valve cover and everything in between. Why they didn't put a larger fender on this bike is beyond me. You could put a fender extender on it, I guess.

I performed the break-in maintenance myself. The valve clearance check and adjustment procedure is a bit of a pain because the access to the valves is so limited and requires a lot of components to be removed or moved. The procedure is not technically difficult especially since the camshafts do not need to be removed in order to replace valve shims. Oil and filter changes are simple but require that the right side fairing panels (middle and lower) to be removed. It can be a little difficult to remove the middle fairing panel.

The bike has been reliable over the years that we've owned it. There have not been any failures, though the total km on the bike is quite low (we haven't insured it every year). Maintenance wise, I've changed the oil and filter multiple times, replaced the coolant and the brake fluid, checked and adjusted the valves, checked the air filter, checked the chassis and exhaust mounting bolts, cleaned and lubed the chain and checked the slack (only needed adjustment twice). The original battery had to be replaced in 2020. Up until recently the bike still had the original tires (they were not worn out, but they had reached their end of life). We mounted a set of Michelin Road 5s, a sport touring tire, at about 11,850 km. Everything else is still original.

All in all, we really like our CBR250RA (ABS model); it’s not perfect, but no bike is I guess. It is well suited to smaller and newer riders, but many experienced riders will enjoy the riding experience too. My brother-in-law owned a 2011 Kawasaki Ninja 250 as his first bike, and he didn’t have any problems with it. I test rode his bike, but personally, I prefer the CBR250RA over the Ninja 250; I like the power characteristics of the Honda much better and found it more fun to ride.