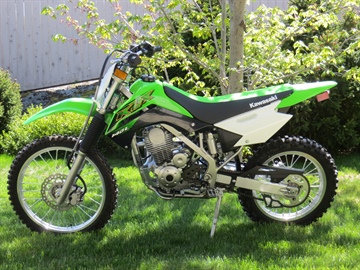 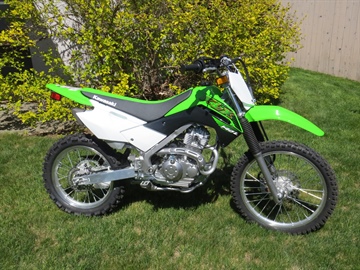 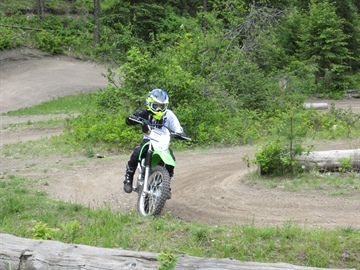 carburetor, chain adjustment marks, some rubber components rotted when we got the bike

We purchased the 2020 KLX140L new at the beginning of the 2020 riding season. We bought the bike for our kid to learn on. It was slightly on the tall side in the beginning. We've had two seasons with the bike, and it should be good for at least one more season of riding before we need to buy something bigger. Note that the model name for this bike was changed in 2021 from KLX140L to KLX140RL; it's the same bike.

The build quality seems ok (see comments below). The bike is reasonably light for the class, and it's fairly easy to ride. It's certainly not intimidating for a new rider provided they're tall enough for the seat height. Our kid has progressed quite a bit as a rider over two seasons and is quite confident on the trails provided it doesn't get too challenging. I have had to ride it through some more difficult sections occasionally.

The bike has enough power for our young rider. The bike handles fine on the varied trails it's been used on. It has disc brakes front and rear which provide good stopping power. I find the rear brake peddle a bit high, but that could be because my legs are bent more than a shorter rider when I ride the bike. But my kid, who has longer legs now, thinks it's a bit high too. The rear shock is fully adjustable (preload, compression and rebound damping) so you can set it up for different riders, riding style or terrain, or to compensate as the rider's skill progresses. The bike comes with some engine protection: minimal plastic skid plate and metal guards extending out from the lower portion of the frame. The bike has an electric starter and a 5-speed manual transmission and clutch.

We are still on the stock tires. They've been fine for trail riding, but the bike hasn't been ridden aggressively. The trails (single track and twin track) have varied from smooth dirt, gravel, mud, puddles, small loose rocks, embedded rock, from level ground to moderately steep hills (easy to intermediate conditions).

I purchased the Kawasaki service manual shortly after buying the bike as I do for most of our bikes. The first maintenance was due at 5 hours (or 1 month) of riding time and was pretty straight forward. This service includes changing the oil and filter and checking the valve clearances as well as checking a number of other items such as fasteners, air filter, controls, etc. The KLX140L has screw type valve adjusters. The intake valve was slightly tight by 0.01 mm, but the exhaust valve was within specification. I adjusted them both to be about the midpoint of their ranges. Subsequent maintenance intervals are at 50 hours or 6 months (100 hours or 12 months for the valve clearances).

We had problems with the bike from day one. It was difficult to start (cranked over fine) and ran very poorly. The bike stumbled at low engine speed with very little power available, even when thoroughly warmed up. It was very difficult to ride the bike at slow speed. It was like the pilot jet was obstructed. The bike seemed to run ok once you got the rpms up past maybe third engine speed. We had the bike back to the dealer several times for service under warranty. The carburetor was adjusted each time and inspected once. They swapped out pilot jets (#38 to #42 to #40 and back to #42), tried shimming the needle, adjusted the air/fuel mixture screw and adjusted the idle speed. Sometimes it ran better at elevation, (1200 - 1500 m) and sometimes it was worse. Some of the adjustments made resulted in the bike stalling at idle and difficulty starting the bike when hot. None of their adjustments completely eliminated the problems. After the warranty period ended, I made a number of incremental adjustments to the fuel/air mixture (pilot) screw. The bike runs well at 500 m elevation with the #42 pilot jet: no bogging or hesitation when quickly opening the throttle. To run better at the higher elevations that we're normally riding at, the fuel/air mixture screw needs to be adjusted from the setting used at 500 m (the elevation at the dealership), otherwise the bike will hesitate when quickly opening up the throttle at low engine speed. From mid-engine speed upwards, we haven't experienced any noticeable fueling issues. The top-end power has been good (for the class) from the beginning, and with the fueling sorted out, the power at lower engine speeds has been fine.

From our experiences, I would conclude that the carburetor used in this bike is very sensitive to elevation (and perhaps temperature) changes. It can be adjusted to compensate for those changes, but it is finicky. Trying to tune the carburetor at low elevation and then riding it at high elevation is not going to work well; the dealer was unable to do it even with multiple attempts and detailed information provided by us. You could try adjusting the carb and testing out the bike at the elevation you're going to ride, or you can still adjust the carb at home but tweak it for the elevation you're going to ride. Currently a #42 pilot jet is in the bike, but a #40 is probably the better choice for 1200 m. The stock pilot jet is a #38. We're running the stock main jet and needle with no shims, and mainly riding at elevations of 1200 to 1500 m.

Other quality issues included a cracked rubber grommet / cap on the starter motor where the wire connects, a rotted and torn rubber boot at the carburetor end of the throttle cable, and one of the see-through drain tubes for the air box had a cut or crack in it. The defective parts were replaced on warranty. I also discovered a leak in the air box after washing the bike and finding a few drops of water in one of the other air box drain tubes on the clean side of the air filter (see photo). The seal between the air box and the intake to the carburetor (carburetor duct) looked questionable (the sealant was coming off), so I cleaned it up and resealed the joint with silicone sealant.

Another point of contention are the chain adjustment alignment marks: they are pretty much useless because they are so imprecise. I ended up measuring from the ends of the swingarm when adjusting the chain. It would be much easier to adjust the chain (a standard chain, not an O-ring one) if Kawasaki had used snail-type chain adjusters like on the Honda and Yamaha.

Other than the points mentioned above, the bike has just required routine maintenance applicable to most other motorcycles. There have been no other issues.

Refer to the service manual for more information and to verify the following.

To check the valve clearances, you need to remove the side panels, tank cover, seat, fuel tank, camshaft chain cover (circular cover on top left side of cylinder head), valve adjusting caps (2) and the cap from the alternator cover on the left side of the motor which enables you to rotate the crankshaft counter-clockwise with a socket and ratchet on the crankshaft bolt. It will be easier to rotate the crankshaft if you remove the sparkplug first, but it's not required. Rotate the crankshaft counter-clockwise until the mark on the camshaft sprocket aligns with the projection mark (bump) on the top of the cylinder head after making sure that the intake valve has opened and then closed, and if not, then rotate through another revolution so the piston is at TDC on the compression stroke. You should be able to wiggle both rocker arms with valve adjusters at this point.

Measure the valve clearances with a feeler gauge. If a valve clearance is out of spec, loosen the valve adjuster locknut, adjust and then tighten the locknut. Recheck the valve clearances. Apply a light coat of oil or grease to O-rings prior to installing the covers and plug. Replace O-rings if damaged. Tighten all bolts to spec. Reinstall removed parts.

The main competition for the Kawasaki KLX140L includes the Yamaha TT-R125LE, Suzuki DR-Z125L and the Honda CRF125FB. All four bikes have a front disc brake, an air-cooled engine, a manual transmission with clutch, a 19-inch front wheel and a 16-inch rear wheel. Another bike to include here is the Honda CRF150F, but it hasn't been available for sale new for a few years now. (MSRPs are in Canadian dollars, June 2 2022.)

We considered all four motorcycles and checked them out in person. We decided against the DR-Z125L because it was a bit too tall and was kick start only. There's nothing wrong with kick start, but we thought it would be easier for a new rider to have electric start. The Honda felt the smallest of the bikes, and we seriously considering buying a leftover 2018 model. We chose the KLX instead of the Honda because my kid liked it the best, we were offered a pretty good deal, it had a 5-speed transmission rather than a 4-speed, disc brakes front and rear, and a fully adjustable rear shock. On top of that, the Kawasaki has the largest motor and most likely the most torque. We felt our kid wouldn't out-grow it as quickly. The KLX had the second lowest seat height and the second largest fuel capacity. The seat height on the Yamaha seemed a little too tall at the time, and we could not get as good of a deal.

We have had some frustration with the KLX140L getting it to run optimally at lower engine speeds. I was tempted to sell or trade it early on, but we kept it and sorted out those issues for the most part. The KLX has some redeeming qualities including making pretty good power and having decent suspension and brakes. So, would I recommend the bike? Yes, knowing what I know now. It would be nice to have fuel injection, but only the Honda does in this class. The Honda is the most expensive, and I think it comes up a bit short in some other features for that higher price. All of these bikes are probably good choices depending on the size of the rider, how aggressive they ride and your budget.