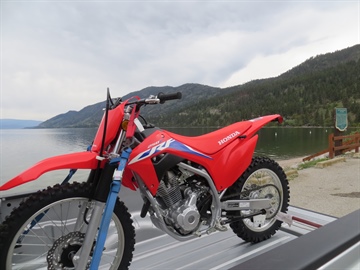 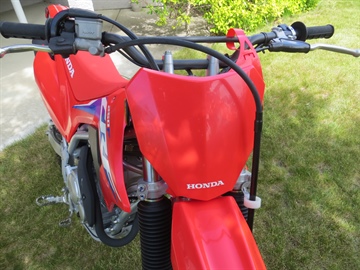 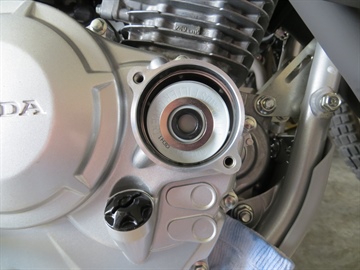 a bit heavier and more expensive than some of the direct competition; no suspension adjustments other than rear preload; fork feels harsh, but it may soften up with use

The bike was covered in a film of packing grease when I picked it up. That would have been applied by Honda to prevent corrosion during transport and storage. That's fine with me. The dealer was going to power wash the bike, but I asked them not to. I'd rather clean it myself (it took some time). Some of the welds on the frame are a bit messy. The two front skid plate mounting tabs are not quite aligned.

The paint on the frame is quite thin (as is the case on our KLX140L) and will wear through within a ride or two where it makes contact with your boots if you don't have some kind of frame protection. As a preventative measure, I applied white electrical tape to the sides and front of the frame before I rode the bike. It may not look pretty, but it will add some protection. You might say "so what, it's a dirt bike", but the added protection will help prevent rust. Also, I just like to keep my bikes in good condition. The paint, or maybe it was powder coating, on my old Honda XR200R was far superior than the paint on this bike. Honda really cheapened-out here.

The bike started right up on the first attempt. While breaking-in the bike, I was somewhat easy on it (no hard starts, no full throttle, varying the rpms). The motor makes a decent amount of power (even without full throttle), the brakes seem fine, gear changes are smooth and easy, handling is ok, I guess. The fueling is a bit abrupt at low speed / low gears, but I've found that to be the case with a lot of fuel injected bikes; it might just be a matter of getting used to it. The only criticism I have is that the forks seem harsh like when riding over embedded rocks. I expect (hope) that it will soften up a bit more. That was certainly the case with the KLX250S I previously owned.

I've had a few, non-motorcycling related injuries in 2022, so I haven't been able to ride the bike as much as I would have liked or planned. I've pretty much recovered from those injuries now, and I was able to get out on the bike a bit more later in the season. The bike is pretty much broken-in, and I've ridden it a bit harder, but not real aggressive as I just trail ride with my wife and kid. I'm liking the bike much more than I did at first. The suspension has softened up a bit, and I hope it continues to do so a bit more. I'm mostly satisfied with the bike. I still find that the fueling is a bit abrupt when transitioning on and off the throttle; I think a carburetor is superior in that regard.

According to the owner's manual, the initial maintenance is due at 150 km or 1 month of riding. It was pretty straight forward. The valve clearances need to be checked (done, and all in spec) and the oil and filter need to be changed (done); there were some other things that need to be checked as well such as the chassis bolts (upper fork tube bolts and front rim lock needed tightening), air filter (good) and chain adjustment (good), etc.

I purchased the Honda service manual for the bike (it wasn't shipped until 4 weeks after I ordered it from Helm (US) even though it was supposedly in stock; shipment time was about a week, and I got charged an additional $30 and sales tax by FedEx).

I've already managed to puncture the rear tire with a nail (probably fell out of the back of a pickup that had been used for hauling construction waste previously); some people are so bloody stupid and/or inconsiderate. I didn't even notice until I got home and saw the nail in the tire; it didn't completely deflate until I pulled the nail out. I could have patched the tube, but I decided to just replace it with a standard Michelin Offroad tube (heavier than the stock Pirelli tube) for more confidence. I must say, I struggled levering this tire over the rim, more so than any other tire (I've fixed about 4 flats, and replaced 8 tires in the last 5 years). More specifically, I was having difficulty getting the tire spoons between the tire and the rim and hooking the edge of the tire. I don't know if the issue was the design of the rim or the tire or that the tire was colder than the others; the tire did feel stiff (usually I let the tires warm up in the sun, but it was cooler and overcast that day). I was using a Motion Pro Bead Buddy and kneeling on the tire to keep the bead in the centre of the rim on the opposite side. Maybe the rim lock, which I had loosened the nut off of almost completely and pushed in, was interfering. I'm sure I'll have the opportunity to go through this again.

I've been running my tires at 15 psi as recommended in the owner's manual, so the chance of getting pinch flats is small. I generally don't need the increased traction offered by running lower pressures. There are a lot of rocks (all relative) on some stretches of the trails I ride, almost no sand, and sometimes a lot of mud and puddles. Most of these trails are more open two-track although there are some tighter, rougher and moderately challenging sections (for a less experienced offroad rider). I don't ride much single track and nothing extreme. This tire pressure (15 psi) is likely contributing to the harsher feel of the forks, though, so maybe I'll try slightly lower pressures.

I installed a Motion Pro oil filter magnet (23.8 mm) before I even rode the bike. There was a fair amount of steel filings (like grey paste) stuck to the magnet and the outside metal of the oil filter it was stuck on at the first change, but that was expected.

The bike comes with a small plastic skid plate, but it provides only minimal protection. I purchased a model-specific Emperor Racing aluminum skid plate from a local Honda dealer, but it didn't fit properly: the bend didn't conform to the frame tubes resulting in a large gap between the front top edge of the skid plate and the frame; the supplied top mounting bolts were too short to engage the threads of the top frame skid plate mounting tabs. The top portion of the skid plate was not parallel to the frame tab faces, and the supplied spacers for the top mounting points were also about half of the required thickness. The rear mounting holes were off a bit too. If it was just the holes being a bit off, that wouldn't have been a big deal; I could have just enlarged the holes a bit. I tried mounting the skid plate a few times, varying the process each time (but not modifying the skid plate).

I ordered an Anker plastic skid plate from HyperLite Moto in the US. It cost about $130 CAD with shipping (USPS), so it's not cheap, but it's quite a bit less than the aluminum skid plates that I priced out. It took about 2 weeks to arrive (I didn't have to pay provincial sales tax or brokerage fees). The skid plate is advertised as being 5 mm thick, but it's a bit less (4 mm on sides, about 4.5 mm on the bottom). The OEM skid plate is 3 mm thick. The Anker skid plate should offer adequate protection for the riding I do. It's supposed to install with the stock bolts, but I had to purchase longer bolts and spacers for the top front mounting locations. I used 5 mm flat plumbing washers for the spacers. For the left side upper mounting tab, I also had to add a 1 mm thick regular washer. All the holes lined up, and the curve of the skid plate matched that of the frame unlike the Emperor Racing skid plate (on both counts). The skid plate needs to be removed to change the oil and filter. Access to the oil dipstick is limited; you either have to bend out the side of the skid plate (it returns to normal position) or remove it.

Comparing the CRF250F to other bikes

Bikes in this class include the Honda CRF230F (replaced by the CRF250F), Yamaha TTR230, Kawasaki KLX230R/KLX230RS and maybe the Kawasaki KLX300R (at the upper end). I've looked at, and have sat on, all of these motorcycles, but I have not ridden any of them. I have owned a Honda XR200R, the predecessor of the CRF230F. I'll point out some of the features and specifications.

The CRF230F and the TTR230 are very similar to each other. Choosing one over the other may come down to what's available in your area, your relationship to your local dealers and price. 2019 was the last year for the CRF230F, so you would be looking for a used one. The TTR230 is still available new as a 2023 model. The CRF230F only has an oil screen (no oil filter), but the TTR230 has an oil strainer and oil filter. You would likely need to change the oil more frequently on the Honda. Both of these bikes are lighter than the CRF250F. I recently sat on a new TTR230, and it felt smaller than the CRF250F. The CRF230F and the TTR230 both use carburetors, have a front disc brake, rear drum brake, are air-cooled and have non-adjustable suspension except for rear spring-preload. Both should be extremely reliable and simple to maintain. The TTR230 has a seat height of 870 mm (34.3 in), curb mass is 114 kg (251 lbs) with a fuel capacity of 8 l). The TTR230 lists new for $5099 CAD for the 2022 ($5399 for 2023) + fees + taxes and has only a 90-day warranty.

Like the CRF250F, the KLX230R/RS has fuel injection, front and rear disc brakes, air-cooling and non-adjustable suspension except for rear spring pre-load. The KLX has a two-valve head, whereas the CRF250F has a four-valve head. The KLX has a strange variable idle speed that supposedly is to help prevent stalling the motorcycle. I've never ridden a KLX230R, but the initial reports of the variable idle speed system were generally negative. There is now an after-market fix for it, though. The KLX230R seat height is 925 mm (36.4 in), which is quite high for this class, curb mass is 115 kg (254 lbs) with a fuel capacity of 6.6 l. The KLX230RS has a lower seat height at 900 mm (35.4 in). Both list for $5099 CAD for the 2022 + fees + taxes, and have a 6-month warranty. The MSRPs for the 2023 models are up $300.

Would I recommend the motorcycle to others? It depends on what your performance requirements are. If you're wanting a recreational trail bike that's easy and fun to ride, low maintenance and likely very reliable, then yes, I would recommend it.